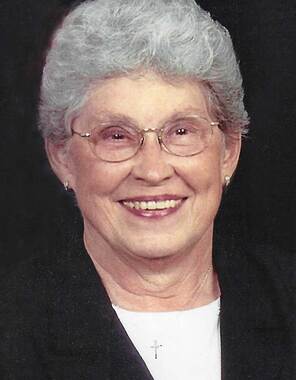 Back to Arlene's story

Arlene Volk, age 84, of Ingraham, Illinois, passed away Friday morning, January 31, 2020, at the Villas of Holly Brook in Newton.
She was born May 20, 1935, in Richland County, Illinois, the daughter of Enoch L. and Laura A. (Doll) Kocher. She was united in marriage to Don Volk on April 5, 1956, in Stringtown, Illinois, and together they shared 54 years of marriage until his death February 5, 2011.
Arlene was a homemaker. She enjoyed gardening, baking, watching birds, playing cards, and tending to her flowers. She was a member of Holy Cross Catholic Church in Wendelin and had been an active member of the Home Extension. Arlene enjoyed watching St. Louis Cardinals baseball and cherished time spent with her grandchildren and memories of dancing with Don, whom she is now at last sharing a dance with again.
Don and Arlene were the parents of 5 children: Ervan (Cindy) Volk, Walter (Bonne) Volk, and Sheila (Kevin) Moore, who survive; and the late Christine Adams and Janet Volk. She is also survived by a son-in-law: Jim Adams; 8 grandchildren: Justin Volk, Kurt (Richelle) Volk, Kiley (Neil) Borgic, Kimberly Adams, Bradly Adams, Landon Volk, Lauren Volk, and Lance Volk; 5 great-grandchildren: Adalyn, Kayson, and Braylee Borgic, Jackson and Jillian Volk; and 2 sisters: Myrtle Radke and Edna (Alfred) Miller.
She was preceded in death by her parents; husband; 2 daughters: Janet Volk and Christine Adams; and 2 brothers: Paul W. Kocher and Norbert Kocher.
A funeral mass will be held 10 a.m. Monday, February 3, 2020, at Holy Cross Catholic Church in Wendelin, with Father Mark Stec officiating. Burial will follow in Holy Cross Cemetery. Visitation will be 3-6 p.m. Sunday afternoon, February 2, and 9 a.m. until time of service on Monday at the church. Frank & Bright Funeral Home in Flora assisted the family with arrangements. To share a memory or condolence visit www.frankandbright.com.
Published on January 31, 2020
To plant a tree in memory of Arlene Volk, please visit Tribute Store.

Plant a tree in memory
of Arlene

A place to share condolences and memories.
The guestbook expires on April 30, 2020.

Through God's gift of eternal life, my Aunt and blessed Godmother has passed on to be with Don, once again. May she rest in peace. 🙏 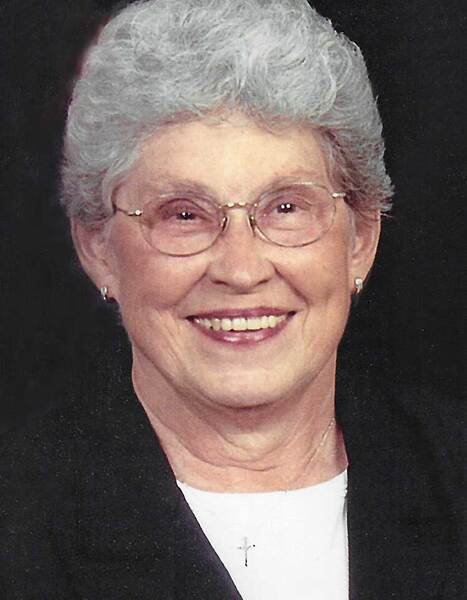