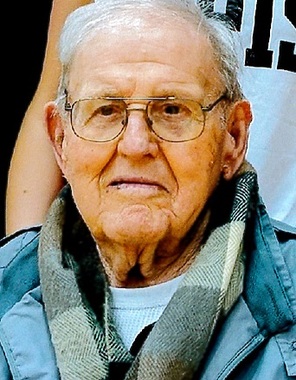 Donald Edward Brinkerhoff, age 94 of Paris, Illinois, passed away at 1:05 p.m. Sunday, January 19, 2020 at Paris Health Care Center. He was a farmer, a member of First United Methodist Church in Paris, a member of the Odd Fellows, served on the Grandview Cemetery Board, and he had played Santa Claus for several years.
Born September 27, 1925 in Paris, Illinois, he was the son of the late Henry Ernest "Blue Sr." Brinkerhoff and the late Sylvia (Glatthaar) Brinkerhoff. He married Dorothy Jane (Hacker) Brinkerhoff October 11, 1947 at the First United Methodist Church in Paris. Dorothy passed away January 14, 2017. Survivors include three children; Nancy (Mike) Ferguson of Paris, Rick (Betty) Brinkerhoff of Paris, and Donna (Bruce) Weir of Hawaii, grandchildren; Scott (Lisa) Brinkerhoff, Mark (Kara) Brinkerhoff, Jonathan (Marsha) Brinkerhoff, Christopher (Kacey) Brinkerhoff, and Justin (Nina) Brinkerhoff, and 10 great grandchildren. He was preceded in death by his parents, his wife, twin sons, Tim and Terry Brinkerhoff, and his brother Blue, Jr. Brinkerhoff.
Visitation for Mr. Brinkerhoff will be held from 9:00 a.m. until 11:00 a.m. Saturday, January 25, 2020 in Stewart and Carroll Funeral Home. Funeral services will follow at 11:00 a.m. Saturday in the funeral home. Burial will be in Grandview Cemetery. Memorial contributions may be made to First United Methodist Church or the charity of the donor's choice. For further information and online condolences, please visit www.stewartandcarrollfuneralhome.com.
Published on January 20, 2020
To send flowers to the family of Donald Edward Brinkerhoff, please visit Tribute Store.

Send flowers
in memory of Donald

A place to share condolences and memories.
The guestbook expires on April 19, 2020.